Skip to content
Nothing ever happens when it drizzles, have you noticed? The day drizzles too. Heavy rain could turn a road into a river, but a steady drizzle just turns your day into a soggy pulp of nothing. Not that I want the river; I had enough of those back in India.

After we got married, D and I rented an apartment in Cornfield Road in Calcutta. Though the road didn’t run along eponymous fields of corn, it did harvest something else. Rainwater. Legend had it that Cornfield Road could get flooded on a dog’s pee.

We started our life there with one such legendary flood. 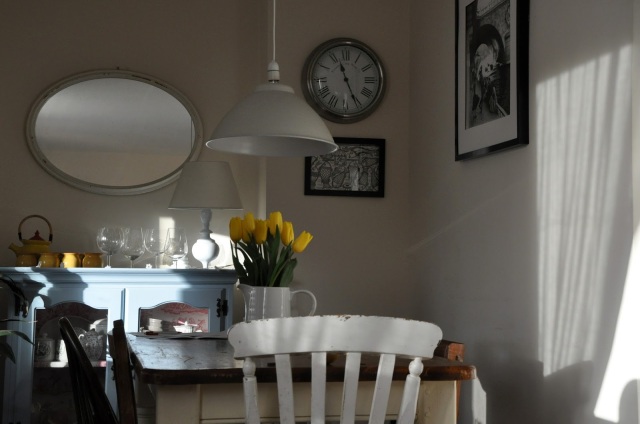 It was the monsoon of 1999, and the skies were crying like a colicky baby. The skies cried, the waters rose, and I watched from our first floor balcony with mixed emotions: half anxious adult, half excited child. The excited, less-practical me wondered how high the waters would rise; if it would give us future anecdotes to roll our eyes by. (Maybe even something to write about in a blog fifteen years later.)

In the evening, after a few hours of copious rain, we got a call from our landlady who lived a floor above us. Over the years, she had developed a nose for floods; she suggested we stock up on essentials from the neighbourhood grocer, while we could. Suspecting greater wisdom, D and I waded out in calf-deep water with useless umbrellas.

Next morning, we woke up to a kitchen stocked like a bomb-shelter. And the lull of gentle waves. We could’ve been in the Maldives.

When we stumbled bleary-eyed onto the balcony, a makeshift raft was floating past. A car that had been parked in front of our house was almost under water, it’s roof shining like an island. On the raft, three men stood grinning at the bloody adventure of it all. Full of cheerful foreboding, they pointed at the main road, towards Ballygunge Station.
“It’s much worse there, didi. Enough water to drown a child,” they shouted.
The woman in the house opposite ours poked her head out of her ground-floor window to inform us that the water was up to their bed. There were whispers of water snakes.

The drains were saturated, everyone said. The water could stay for days, our landlady predicted. So, later that morning, D and I packed a small overnight bag and decided to go to Ma-and-Baba’s for a couple of days. The water was too high for me to walk through now. D carried me on his back till the end of Cornfield Road, where the water level started to drop; a rickshaw carried us the rest of the way.

When we reached Ballygunge Circular Road and got off the rickshaw, there was not a blip of a flood. Not even a darn puddle. This was higher ground, the roads had already dried, and we looked like a pair of comics in our wet, rolled-up jeans. Clutching onto our little overnight bag with the expressions of the newly-evacuated.

In the oven, on days that drizzle

When its grey outside, I say cook a squash that looks like the sun. Stuff it with prawns and coconut milk and lemongrass and fresh coriander. Use your squash like a bowl, fill it with things and sit and watch it cook itself. It’s the beach.

Pre-heat oven: 150 degrees C.
Cut a lid off the squash, empty the inside. Smear the hollow with a sprinkle of salt and oil.
Put the lid back on and slide it into the lower rack of the oven for 30 minutes.

Take out the squash and check if the inside is cooked. If it’s not, put it back in for another 10-15 minutes. Don’t worry if the skin is charred – it gives the whole thing a beautiful flavour.

Once the inside is tender, open lid and put in the prawns, chilli, ginger and lemongrass. Top up the squash-bowl with coconut milk, covering the prawns. Add the coriander. Put the lid back on.
Put the squash in for just 10 minutes more.

Take it out, open lid and add a squeeze of lime. Serve the squash whole, or scoop out the insides and serve it in a bowl. 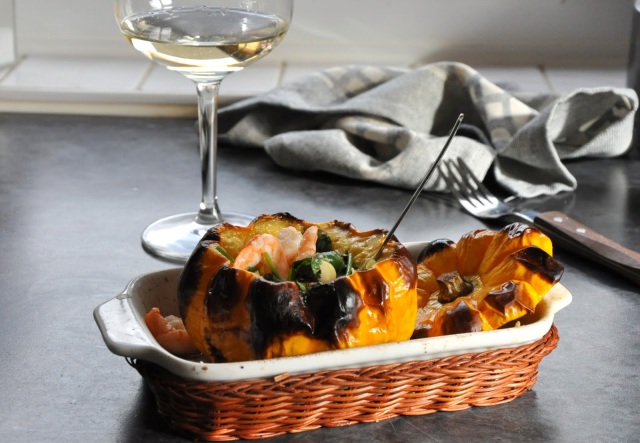 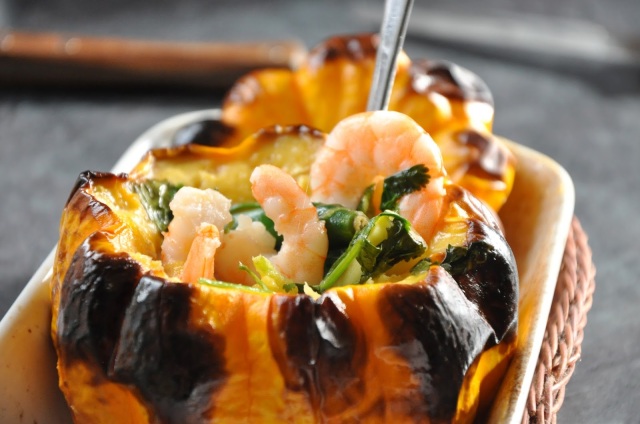 10 thoughts on “While we could”