When Chotto-ma was just 6 months old, we bundled her up one night, boarded a very rickety plane and flew to a bowl of sea soup. It’s also called a caldera – the Greeks pronounce it with a soft ‘d’, a long purred ‘r’, and a voice drizzled with olive oil. The caldera had once been a thirsty volcano. It had greedily sucked in some of sea, and now had boats and fish swimming in its mouth. Our little whitewashed house was in this caldera; stuck inside the belly of the bowl with magic Aegean glue. There was a thin strand of old windblown steps to take us up to the bowl’s rim. A little blue-white town flapped around this ancient rim, held in place by giant, invisible clothes pegs. The town was called Oia. Perched on the island of Santorini. 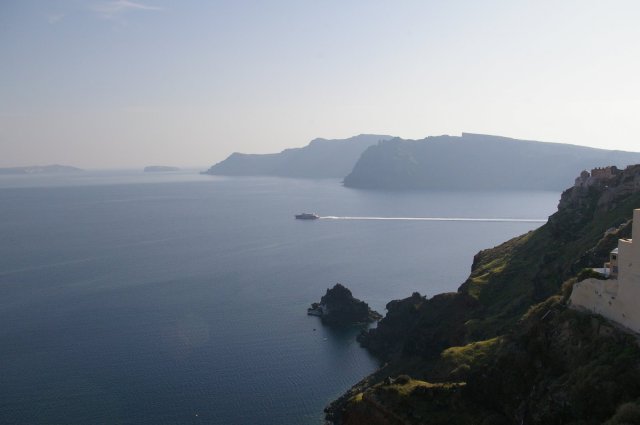 Nothing prepares you for the absurd beauty of the Greek islands. Not the movies. Not Lonely Planet. Nor the glossy posters behind the glass of hungry travel agencies.

In April, the islands are as quiet as a secret. The locals go about their business; their walk unhurried, their smiles as uncomplicated as the white light bouncing off the rough white walls. A few Japanese hold hands with their tripods. And donkeys clip-clop up and down the winding steps. 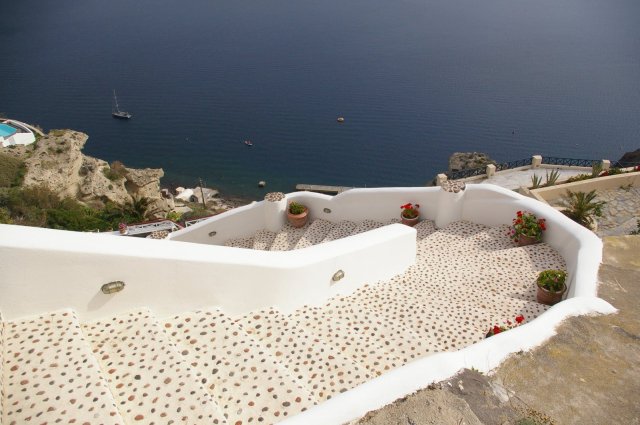 You walk into a restaurant that is full, only to realise that it’s full of the family that runs it. Sisters, brothers-in-law, uncles, cousins, pet dogs, they all sit at the tables, eating and drinking and laughing loudly with their heads thrown back. Then we’d walk in, and they would take a break to serve us what they had in their kitchen – fresh fish caught that morning and grilled in the wood-fired clay oven, creamy mushrooms, tomatoes smothered in olive oil, little parcels of feta and bowls of lemony, green olives.

When you take a boat, float away from Santorini and wash up on one of the other islands, life looks even more unhurried. In Ios, the streets were empty, except for a handful of people who hadn’t given in to the afternoon siesta. Amongst them was a village girl who led us through an armful of alleys to a taverna where we had one of the best meals we have ever eaten. Everything was cooked by the owner’s old mother, and served on family crockery. George, the owner, sat with us at our table, ladling food on our plates. Talking to us about the Lamb Kleftiko while it fell off the bone, about the pan-seared cheese, and the secret recipes that his mother guarded like gold.

On the islands in Greece, the sun melts one day into another. And you forget how long you’ve spent floating from one island to another; or walking down long, empty country roads. The sun shines into your eyes, then warms your back, and finally sets into the sea in an immodest show of colour. Like a carnival dancer in long, loud feathers. 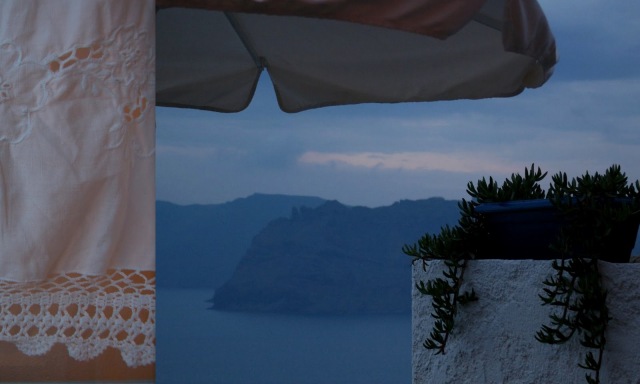 The salty taste of the Greek islands stays on your tongue for a long, long time. They follow you back, and start living in your kitchen. And sometimes, when you’re missing the house that hangs precariously above the Aegean soup, you cook yourself something that takes you back a little.

Mix the feta with parseley, chillies and cumin.
Cut the tops off the peppers, empty out the insides, and stuff them with the feta, leaving a little space on top.
Tear off a bit of bread, and stuff it into that little space on top of each feta-filled pepper. This stops the cheese from melting out.
Put the heads back on each pepper, and put a cocktail stick through each to keep them from opening up.
Put then into a pre-heated oven at 200°C for 15-20 minutes.
Drizzle with extra virgin olive oil and serve.